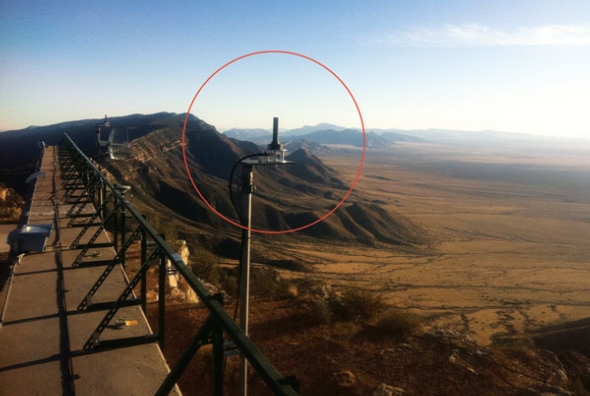 Anyone who has struggled to pinpoint his or her location in a mall, airport or urban canyon amid skyscrapers has experienced a GPS gap firsthand. In fact, the global positioning network is filled with them: buildings, jammers and the landscape itself can block a signal's path between GPS satellites and receivers in a smartphone or other digital device. Technologies such as Apple's iBeacon have attempted to fill in holes with linked sensors that track indoor location using Wi-Fi or Bluetooth, but a new ground-based system by Australian company Locata is the first to produce a signal that merges seamlessly with the GPS network. And it is incredibly accurate.

Conventional GPS determines location by measuring the time it takes for a signal to travel from a transmitting satellite in medium Earth orbit to a receiver. Three such readings from three separate satellites triangulate a location in 2-D space (longitude and latitude); a fourth signal lets the system assess 3-D space (altitude). Each satellite carries four atomic clocks that are synchronized twice daily with a master clock in Colorado Springs, Colo. The blind-spot problem presents itself simply: if a user moves out of the satellites' sight lines, the signal is lost.

Locata's system resolves this issue by layering in an independent network of transceivers that communicate over ground. A test last year in Washington, D.C., by the U.S. Naval Observatory, the division responsible for maintaining the GPS master clock, found that Locata's web of signals synced up within 200 trillionths of a second, more than 50 times faster than GPS. And unlike GPS, the signals are strong enough to pass through walls. “We're analogous to a Wi-Fi hotspot,” explains Locata CEO and co-founder Nunzio Gambale, who has been designing the system for some 20 years.