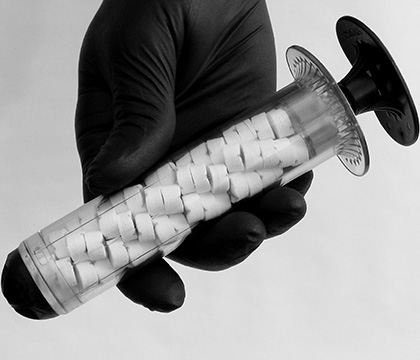 XSTAT 30, a hemostatic device for the treatment of severe bleeding in the axilla or groin area, was cleared for use in both battlefield and civilian trauma settings by the U.S. Food and Drug Administration.

The clearance expands the device’s indication from use by the military only to use in adults and adolescents in the general population.

XSTAT 30 by RevMedx works by injecting a group of small, rapidly-expanding sponges into a wound cavity using a syringe-like applicator.

In a wound, the sponges expand and swell to fill the wound cavity within 20 seconds of contact with blood. This process creates a temporary barrier to blood flow and provides hemostatic pressure. Each sponge contains an x-ray detectable marker to aid in surgical removal.

Early control of severe bleeding may prevent shock and may be life-saving. The United States Army Institute of Surgical Research reports that 30 to 40 percent of civilian deaths by traumatic injury are the result of hemorrhaging; of those deaths, 33 to 56 percent occur before the patient reaches an emergency care facility.